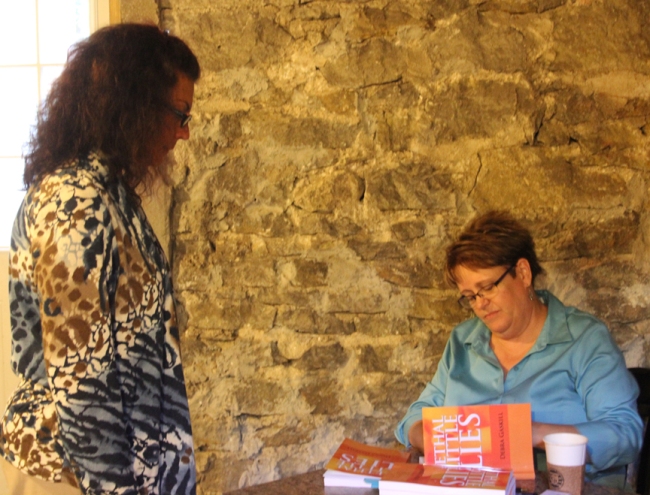 One of the hardest things for self-published writers to do is get publicity, admittedly one of the things that traditional publishers do (or sometimes don’t do) for their writers.

But it’s not hard to do a little promotion. All it takes is a little planning!

With some help from my friends, I was able to put together a great party, plus a string of successive appearances where I am able to sign books, meet people and generally, get my book in front of as many readers as possible.

I chose a date for launch party at a local small-town coffee shop, ordered a cake that looked like the cover of my book (so realistic, in fact, a friend tried to pick it up!) and bought a great sandwich board sign to set on the sidewalk outside proclaiming the event.

But before the August 14 launch, I laid the groundwork for the event: I started with a Facebook page for my book, where I announced the event and invited the general public to the event (not to mention everyone of my FB friends within a 50 miles radius).

I also engaged the local media with a press release that included a headshot and the cover of my book.

I announced the launch on Twitter, multiple times and invited my Twitter followers to a chat on the book the night before on the Facebook page.  Now, I don’t pretend to be self-publishing phenom Amanda Hocking, but while there were just a few folks chatting the night before, there were more than 100 people who “stopped by” in a virtual sense to get a look at what we were doing.

I call that a success!

The launch party itself was small, with friends and family stopping by, along with some nice college students.  I sold enough books to pay for the two carafes of coffee and the cake—not a bad trade!

From there, I was off to Killer Nashville, where I spoke on a panel about small town settings for mysteries. Admittedly, I didn’t sell any books there, but I made a lot of contacts, developed several new Twitter followers and saw a bounce in e-book and hardcover sales once I returned home. Once again, it was a small success on the road to building readers.

An evening reading and book sale at my local Enon Library followed my return from Nashville. This admittedly was an odd event to schedule, with librarian balking at the idea originally because “they’d never done anything like that before.” Once I got her convinced (and donated not only eBook copies, but hardback copies as well), we were on our way. The turnout was again small, but sales went well—more steps on the road to building readers.

In the next several weeks, I have several diverse events: a writer’s group in Chillicothe, the Wool Gathering in Yellow Springs, and another library reading.

Why would I take my books to an event that seems to clearly be non-mystery related? Here’s why: One of my many hobbies is raising llamas and alpacas and spinning their wool into yarn. I often find that knitters, weavers and spinners will pick up my books at these events, so I’m including them on my tour. (I’ve also named several characters for weaving patterns and weavers have fun picking that out.)

Before those events, I will probably follow the same formula: Tweet about the event starting a week or so beforehand, and invite folks to a pre-event Facebook chat.  For solo events, I’ll send a press release to the local media just so they know what I’m up to.

(These days, when it’s tough going for newspaper editors, a well-written press release that requires little or no editing can often be run as it stands on inside pages. But don’t beleaguer your local editor— he or she will stop running press releases that only contain blatant self-promotion. For that, you need to buy an ad, and print advertising for local authors usually doesn’t result in readers.)

Even when I’m not actively promoting, one of the things I always do is have copies of my books with me. You never know where you’re going to sell a copy— I sold books at a Michigan llama show this weekend!

Can’t get out and promote?

Engage readers on social media, such as Twitter, Goodreads and Facebook or blogs.  Hold virtual chats on your books Facebook page or talk to your local book clubs via Skype (or Facetime, if you have a Mac).  Offer to post on other writer’s blogs—and if you have your own blog, keep updating the entries on a regular basis for at least six months to a year. It’s going to take folks time to find you, after all!

Find my latest mystery, LETHAL LITTLE LIES, on Amazon.com and Kobo and on my web site, http://www.debragaskillnovels.com.